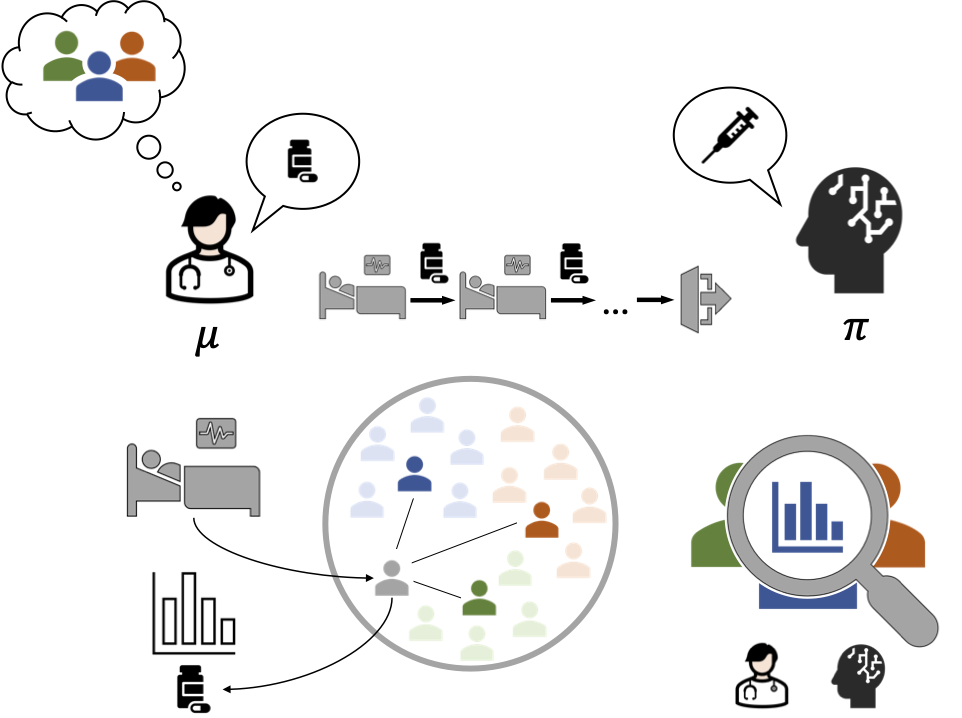 The increasing amount of available data on medical interventions and reported outcomes creates opportunities to search for new clinical policies. As an example, researchers have employed reinforcement learning algorithms to learn new strategies for the management of sepsis [1]. However, for such a policy to be used in practice, it is of utmost importance that its performance, or value, can be reliably estimated. Ideally, the estimated value of this target policy should be higher than the value of the—often unknown—behavior policy followed by clinicians in the observed data.

Even though importance sampling is a popular method for OPE, it suffers from high variance when there are significant differences between target and behavior policies. By inspecting the IS weights, it is possible to collect individual samples for which the policies differ, but this approach does not describe patterns in differences between polices. To address this problem, we suggest estimating the unknown behavior policy using prototype learning [2], which gives us a set of interpretable prototype cases from the observed data. The prototypes are selected by the learning algorithm, and for a specific input, e.g., a patient, the model estimates the behavior policy by comparing the input to the prototypes in a learned representation. The idea is reminiscent of how physicians use their experience from previous patients when treating new ones.

We use the learned prototypes as a diagnostic tool for OPE. By inspecting the behavior and target policies for each of the prototypes, we obtain a condensed overview of differences between the policies. A domain expert can reason about the validity of the target policy and assess whether the data supports evaluating it using importance sampling. Additionally, we use the prototypes to divide estimated policy values into prototype-based components, allowing us to describe situations when it may be beneficial to follow the target policy instead of the behavior policy, and vice versa.

If you are interested, you are welcome to read our UAI 2022 paper [3], where we elaborate on the prototype idea and demonstrate it using a real-world example of sepsis management.